Traveler's Notebook Starter Kit - What I Purchased Instead 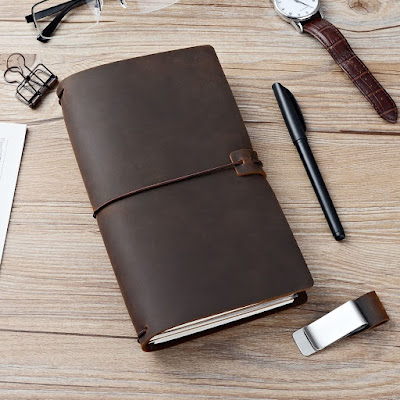 So yesterday I told you why I didn't recommend the TN from Michael's.  I was going to use it until my birthday, and then use birthday money to buy a more permanent TN, but I couldn't last until then.  What did I buy?
I am now using the Refillable Leather Journal Traveler's Notebook in standard size (8.5 x 4.5) from Amazon.  It has everything you need to get started at a reasonable price.  It sells for $28.59 and currently has a $3 coupon you can clip and use.
The one thing you should consider if you are interested in this TN is that the leather scratches easily.  I know some people like the scratches and how the leather looks as it ages. It doesn't bother me, especially as I am just getting the feel of the whole TN scene.
It comes with a zipper pouch and room for 3 cards.  This was perfect for me since I use mine as a wallet; there's just enough room for my driver's license, debit card, and insurance card, and stamps in the zipper pouch. Oh, and it also has a little pocket to slip in cash.
There are 3 inserts included:  lined, plain, and grid, as well as a slide on pen holder and a binder clip.  The notebook has 4 elastics, and I think there was an extra jumper elastic as well. I am not an Amazon affiliate, and will not benefit from your purchase - I just like this notebook and wanted to share. (The images also belong to Amazon)
posted by Becky Perry on March 05, 2021 3 comments:

My Thoughts on Michael's Travelers Notebook

Previously I shared with you guys that I had bought a TN from Michael's to experiment with, to see if I would actually like using a TN.

The reason I chose one from Michael's was simply that it was on sale.  The original cost was $9.99 (a great beginner price), but the ones I bought were discounted to $3.00.  I bought three at that price because they came with two inserts and a folder, and I bought 2 packages of inserts separately because they were discounted to $1.00.  So, even if I didn't like the TN, I would be getting a good deal just with the inserts.

The notebook is standard size and has four elastics, a sturdy brown folder, and two inserts (grid and blank).  The biggest problem I had with this notebook is the elastics.  They were thin.  I mean thin! I had plenty of room to set up my notebook, but once they were in place, they slid all over the place.  The elastics were thin and very stretchy.  I was going to use it until my birthday (end of April), and then decide on a more permanent notebook, but I didn't last more than a week.  I just couldn't handle everything moving all around.

The notebook looked a bit worn when it arrived, but I think maybe it had just been sitting around on a shelf for a long time and maybe handled a bit.  That was to be expected I guess since it was a clearance price.  The front of one of the notebooks had what looked like a spill.  It was shiny, but not wet or sticky.  If I had paid full price for the notebook, I would have returned it.  At this point, I was in it for the inserts. 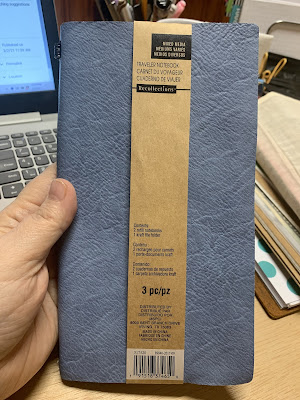 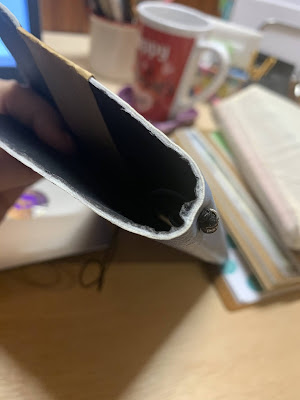 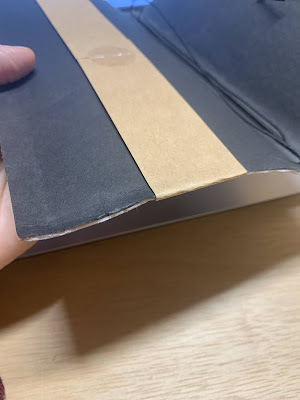 So, would I recommend this notebook?  Only if you received one in great condition and knew something about putting in new elastics.  The notebook is made up of (I believe) vinyl backed with paper for the inside cover, and it was separating in places when it arrived.

Sorry - not a very good review for Michael's - and I hate that because I really love Michael's - but I would stay away from this TN for long-term use.

How to Keep From Fraying the Elastics in Your Traveler's Notebook

So, have you ever learned a new hack and thought, "I wish I had known about this when I started planning!"?  Since I am very new in my TN journey, this is a hack that I am happy to have found.

One of the basics of putting a new insert in your TN is that you open it up to the very middle, where you can see the staple, and then slide it onto the elastic. Over time, those staples will fray your elastic as the notebook rubs up against it.

One way to combat that is to put a bit of washi over the staples to protect the elastic.  I thought that was a great, simple idea and began to put washi on my notebooks.  After having done that, I stumbled upon another simple and useful tip. 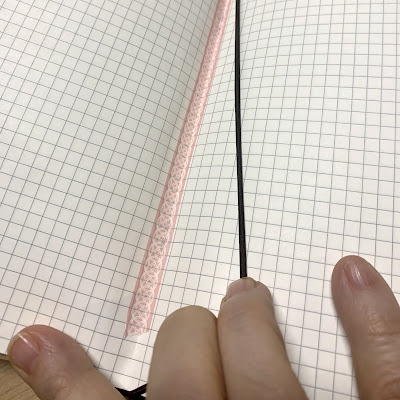 If you don't like the idea of putting washi on your layout, a simpler way is available.  Open up to the middle of the book and then turn the page and put your notebook on the elastic.  You are still in the middle of your notebook and it is not being exposed to the staple.

Of course, you can avoid this altogether if you sew or hand-stitch your inserts! <grin>

I recently heard on a YouTube video, "if you are looking for the perfect planner insert, but still haven't found it, chances are, it doesn't exist."  That made a lot of sense to me.  There are a lot of insert creators out there, and a lot to choose from, but if you haven't found your perfect one, it is probably something unique and special that only exists in your imagination.

I've made all sorts of inserts myself.  Sometimes I like to create them just for the sake of the creating process because I enjoy it, and I need a list of new inserts to create.

I want to create something you guys would like. So, I would love it if you would comment below what kind of insert you would like for me to offer next on my blog (always free) - the more details, the better; don't assume that I know what it should look like.

I can't make promises as to how many I can get to, but you know I am going to try!  Here are some things to consider:

One Week In A Traveler's Notebook - Update 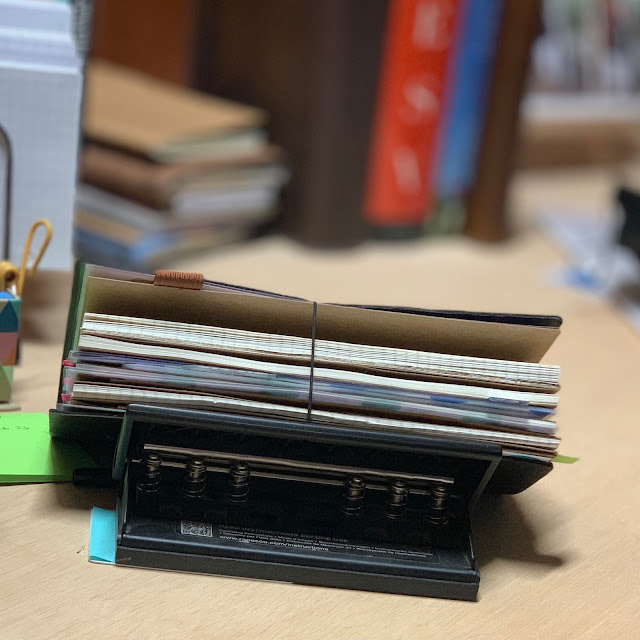 I know for sure that I enjoy using a TN.  Adding inserts, folders, notebooks - whatever I want - has been lots of fun.  I've made this one pretty chunky in just a week's time, and the inserts (booklets) hang out a bit past the notebook cover.  I will take that in account when I purchase my "permanent" notebook around my birthday.
The elastics on this Michael's Traveler Notebook are so thin, and it is about to drive me crazy.  I had another TN in my Amazon cart before I remembered my promise to wait until my birthday, and took it out.  I'm glad I did because I was about to order the wrong size.
So, my decision to give this a trial run was a good one.  I started a list of all my thoughts about the TN in my notes section.  Yep, quality elastics went to the top of the list.  I also want one that has inside pockets, as I always want a wallet setup.  I'm undecided about the closure.  I thought about one with a snap, but elastic definitely encourages my chunky tendencies!
I am so comfortable with making inserts for my compact planner, but making printables for the TN has been a bit challenging (TN calls the little booklets "inserts"), but you know I am going to try!
Anyone else use a TN?
posted by Becky Perry on February 26, 2021 1 comment:

Cool Hack I Discovered for Planners and Traveler's Notebooks

During my exploration of Traveler's Notebooks, I've been viewing a lot of YouTube videos.  There's a whole other side of planning out there, folks!

This morning while I was watching how to use a TN as a wallet, I came across a hack that kind of combines rings with strings - and one that I knew I would be able to use.

As you may know, TN's are basically a combination of notebooks, sometimes with other accessories, such as folders, dashboards, wallet inserts, etc.  The video I was watching showed how to make a credit card holder and how to put it in a TN with an elastic band.  She went on further to show how to put it in a ringed binder with a rubber band.

I thought that was pretty cool, but then she took a small notebook, put a rubber band around it, and put that in her ringed binder.  Wow!  Why hadn't I thought of that?  I like carrying around an extra little notebook in my planner, but it adds so much bulk to the side pocket.

See the picture below?  Just find the center of your notebook and put a rubber band around itand then put the rubber band around/inside your rings.  Your notebook will sit nicely in front, or put it in the back (or the middle if you want!), and your side pocket will still lie nice and flat. It is extremely easy to slip that notebook in and out as well.  I keep a lot of information in my A-Z files, but if you had different-sized planners, and didn't want to buy the A-Z dividers for each planner, put your information in a Reference Notebook, and just move it out of one planner and into another.

It's the little things - know what I mean?

A follower asked for an update of an insert that I made a couple of years ago and asked that it be undated so that she can fill them in herself and use them whenever.  She also asked for a Monday start.

I was happy to accommodate her request and added a few extras, that I'll explain.  These inserts are designed to be printed on half-size paper.

That might not make sense, but once you see it, it should.  If you have any questions, please ask! 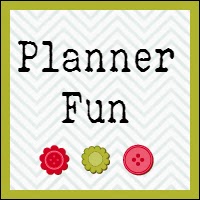